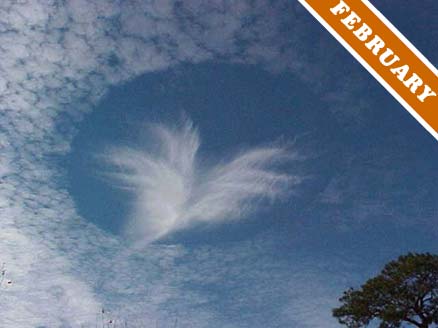 Few of us like to be the first to take the plunge. We hold back at the water’s edge, waiting for others to dive in. Clouds are much the same, as is demonstrated by the phenomenon of a ‘fallstreak hole’.

Layers of high cloud, such as cirrocumulus or the high altocumulus, shown above, are often composed of water that is much colder than 0degC but hasn’t frozen into ice crystals. When water is in the form of tiny droplets suspended in the air, it can behave rather differently from that in an ice tray in the freezer. It can stubbornly refuse to freeze, remaining as ‘supercooled’ liquid at temperatures of –10, –15, –20degC… None of the droplets want to be the first to freeze, and they tentatively wait as liquid, until some brave souls decide to make their move.

For reasons that are none too clear, a particular region of supercooled cloud can throw caution to the wind and decide to freeze into ice crystals that grow and fall below. A hole is left behind, and this spreads outwards as neighbouring droplets are swept up in the excitement and start freezing too.

No sooner have some droplets made the change, than they are all joining in. How appropriate, that the trail of falling crystals can look like a bird taking flight.

This site uses Akismet to reduce spam. Learn how your comment data is processed.

We use cookies on our website to give you the most relevant experience by remembering your preferences and repeat visits. By clicking “Accept”, you consent to the use of ALL the cookies.
Do not sell my personal information.
Cookie SettingsAccept
Manage consent

This website uses cookies to improve your experience while you navigate through the website. Out of these, the cookies that are categorized as necessary are stored on your browser as they are essential for the working of basic functionalities of the website. We also use third-party cookies that help us analyze and understand how you use this website. These cookies will be stored in your browser only with your consent. You also have the option to opt-out of these cookies. But opting out of some of these cookies may affect your browsing experience.
Necessary Always Enabled
Necessary cookies are absolutely essential for the website to function properly. These cookies ensure basic functionalities and security features of the website, anonymously.
Functional
Functional cookies help to perform certain functionalities like sharing the content of the website on social media platforms, collect feedbacks, and other third-party features.
Performance
Performance cookies are used to understand and analyze the key performance indexes of the website which helps in delivering a better user experience for the visitors.
Analytics
Analytical cookies are used to understand how visitors interact with the website. These cookies help provide information on metrics the number of visitors, bounce rate, traffic source, etc.
Advertisement
Advertisement cookies are used to provide visitors with relevant ads and marketing campaigns. These cookies track visitors across websites and collect information to provide customized ads.
Others
Other uncategorized cookies are those that are being analyzed and have not been classified into a category as yet.
SAVE & ACCEPT
Powered by